CONCERNED WITH THE PRESERVATION OF THE NATURAL ENVIRONMENT, WE ENTRUSTED THE STOCKING WITH FISH OF OUR PONDS TO A REGISTERED FISH-FARMING COMPANY.

Since 1997 we have decided to practise a sporting, no-kill carp fishing in the PONDS OF VAUMIGNY 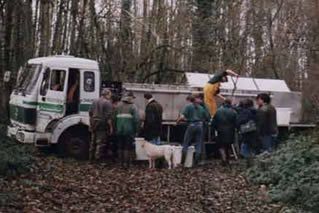 Our prime objective was to increase the carp population, for a fishing of quality.

What we did on our arrival in March 97, was to introduce 137 carps weighing from 12 to 17 lb and coming from a pisciculturist in the area.
The stock in the ponds needed to be balanced.
In order to diversify fishing we introduced 16 sturgeons from 11 lb to 34 lb and 2 sturgeons of 67 lb and 76 lb. 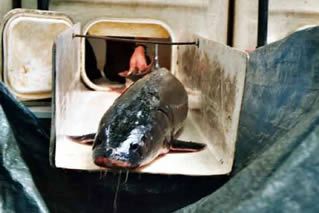 Natural food is available with the presence of crayfish, mussels and mud worms.
These conditions ensure the good growth of the livestock.
To reinforce the food competition, some silurid glanes were introduced: only males in order to avoid their reproduction. One of the largest named Stéphane weighed approximately 100 lb in 2002.
Natural lake carps are savage and difficult to capture.

The fishermen having practised in our ponds affirm they have caught and then freed five different carps exceeding 46 lb - (we saw the photographs).
The largest mirror carp caught to date (at the end of may 2003) weighed 43lb.
The largest commune weighed 40 lb (in April 2003).

A 76lb-sturgeon was caught in June: FRANCE'S RECORD.